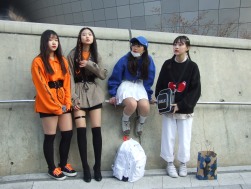 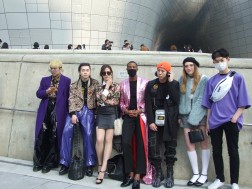 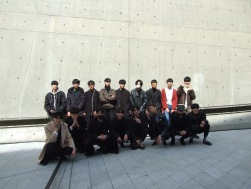 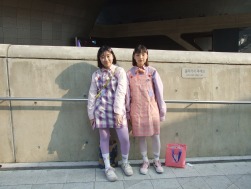 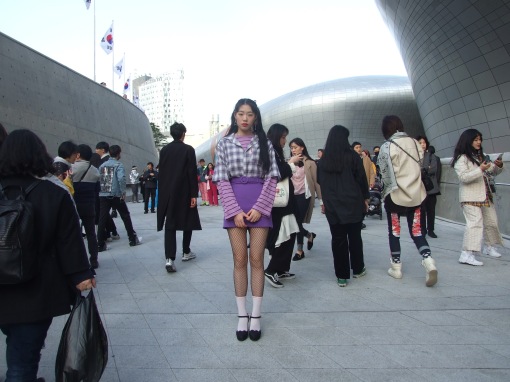 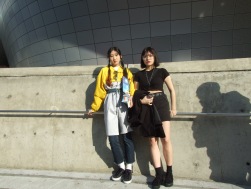 I’m totally accustomed to the madness of London Fashion Week and the street style game, in particular, and Seoul has a similar mix of writers, photographers and models getting papped on the run. It also has the bloggers and fashion crowd just waiting around to be photographed and the people dressed crazily in order to get attention.

However, I would say that the commitment to being photographed is far more intense. I spotted some people on the main ramp down to the show spaces (the best place to be photographed) for hours and hours, moving only slightly, and posing as if they were shooting the cover of a magazine. One guy was even lying down on the ground at one point.

The proportion of men to women was also slightly different. In London, there are always more women but young men flock to SFW in droves and, sometimes, giant gangs, being photographed together. Some even develop cult status among throngs of adoring teenage girls.

I guess the main difference is that London crowds try and act as if they are playing it cool: “You want to photograph little old me?! If you must, I guess…” In Seoul, they wear their heart on their oversized sleeves. Or, rather, they don’t mess around with being coy about their ambitions.

When it comes to the actual looks? Menswear is its own fascinating species that runs from early 20th century references to early 90s hip-hop scene throwbacks to the most Hypebeast looks you can imagine. Womenswear is similarly diverse, with some crossover with menswear (unisex fashion is far more common in South Korea), lots of streetwear looks, elegantly composed ladies, cutesy duo looks and more.

On an international scale, the street style can often get more press than the actual shows and it is easy to see why from the aforementioned giant gangs of handsome young men, to the perfectly preened kids parading around, to the adorable girls who come in pairs, to the increasing acknowledgement that Asian street style, and Seoul, in particular, is incredibly influential on a global scale. The cool kids of Seoul are seriously cool, indeed.