Somehow, my best friend and I had never gone on holidays together before, despite having been friends for over fifteen years. It had become a bit of an issue. In order to rectify this situation, we planned a trip to Bath, along with our other school friend, a couple of weekends ago.

To be honest, it wasn’t a destination that I had anywhere near the top of my many lists of places I want to travel to – I’m not sure why, as I’m obsessed with early 19th century period dramas and so many reference or have scenes in Bath – but I was mostly going to spend time my friends. It didn’t really matter where we were going.

Despite this, I have to say that the city well and truly exceeded all of my expectations and I fell pretty intensely in love with the place. It is incredibly picturesque and a well-maintained historic gem that runs like a well-oiled machine. Every street corner is beautiful and, clearly, great pride has been taken in, not only keeping the place clean and in order, but also in making it as pretty as possible. There is lots to see and do and it is an easily walked town – something I always prefer as it allows you to really get a sense of the place.

Much as I loved it though, there were a few cock-ups during our trip that I learned from and that you might want to keep a mind if you are planning a visit of your own…

Bath is home to lots of stunning hotels and period properties but we decided to go with a neat little modern apartment, a two minute walk from the railway station, that we found on Airbnb. While we saw lots of pretty houses and gorgeous apartments with antique interiors, many were located a ways out of town or up hills. We knew we’d be walking a lot and wouldn’t want to have to trudge uphill after a long day; as it was incredibly warm that weekend, this turned out to be an even more solid decision. Sticking close to the railway station is a good idea, in general, as this is where the trains arrive (obviously), most buses end up and where you’ll readily find taxis. It’s just the handiest place to position yourself. 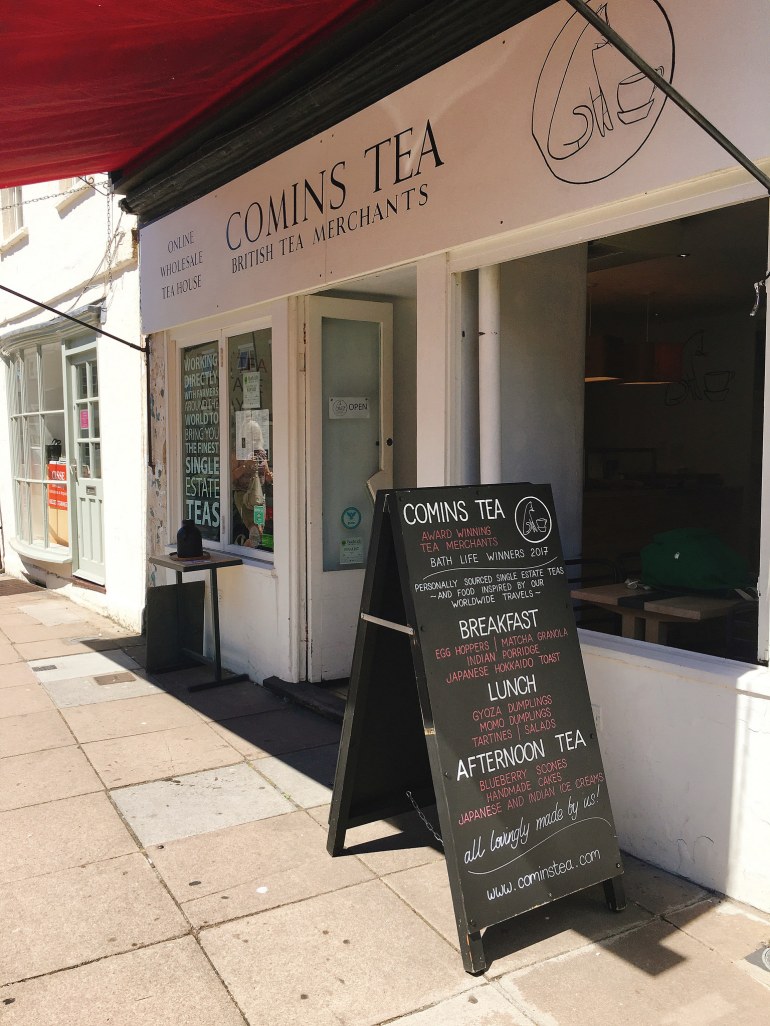 We ate out for almost every meal and all of them were enjoyable, though we did end up in a chain restaurant once (often hard to avoid in the UK) due to necessity. However, the best meal of all, in my opinion, was when we stopped by Comins British Tea Merchants for lunch on the second day. Not only do they serve excellent quality tea (Black, Green, White, Oolong, Pu-erh) properly (in the right tea sets, at the correct temperatures, brewed for the optimal amount of time), they also serve breakfast, lunch and afternoon tea. I opted for a white tea and some pork gyoza, which paired beautifully together and followed it up with the Hokkaido Milk Toast with cinnamon butter (technically a whole breakfast menu item on its own). My food was delicious and the tea perfection but the venue was equally charming; with Scandi-minimalist interiors, a breezy store-front that was opened to the elements for the hot day that was in it and a peaceful tranquility about the place, emphasised by the fact that quiet conversation at the surrounding tables was the only soundtrack. 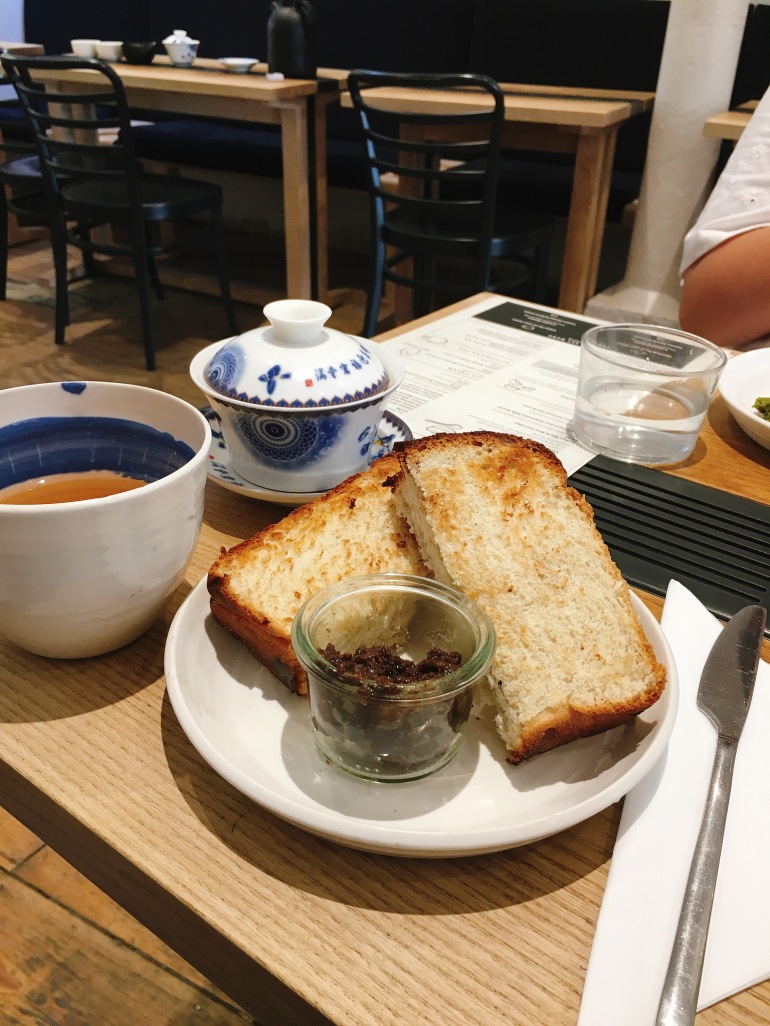 Of course, I can’t not mention Sally Lunn‘s, one of the oldest eateries in the city and home of the original Bath Bunn. After tiring ourselves out around 6pm on the first day, we popped into the eccentric little place for a snack and something to drink and cool ourselves down. The stairs are a bit of an obstacle course, something that even our relatively short party had to carefully navigate and duck in all the right places, but the interiors are adorable and the whole place is rather charming. The menu is extensive and they offer all three meals of the day and a wide array of teas and cakes, including a variety of their famous Bath Bunns. While I did feel like I should try one, I ended up getting the Elizabeth Sponge – a Victoria sponge cake with lavender-flavoured sponge, raspberry jam and rose butter cream – and a rose lemonade, both of which were truly delicious. 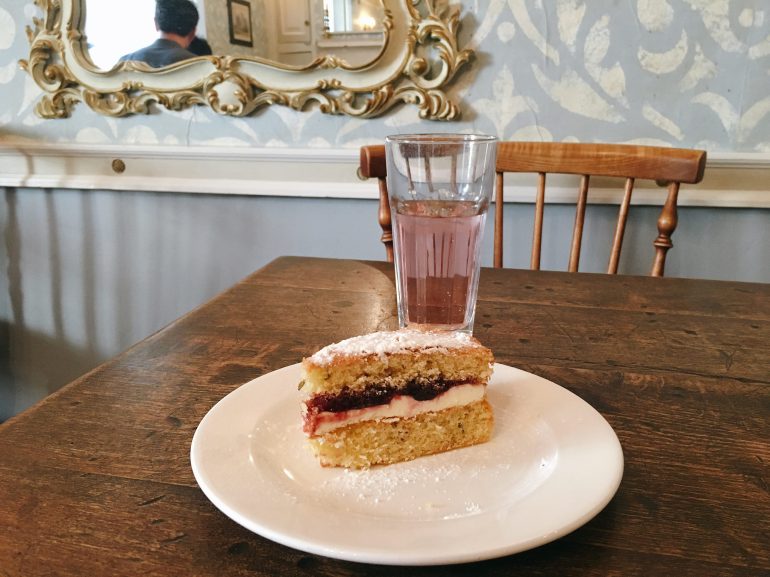 As I noted, there is lots to see and do in the city. Of course, a visit to the Roman Baths of Bath – with their natural thermal waters, ancient Roman ruins and beautiful 19th century spa building – is a must as it is the city’s most iconic attraction. However, I had two personal highlights during the trip. One was the visit to the Bath Fashion Museum, which has around 100,000 objects but takes you through the history of British fashion from the 16th century through to the present day with a selection of just 100 of these pieces. Not only are the garments and accessories fascinating but the section in the middle of the museum where you can try on recreations of period clothes made my year. Fashioned like aprons, the items can be pulled on over your clothes and tied at the back, and make for the best things ever to take goofy group photos in. And also some nice personal photos because you’re so effing stoked that Regency Era gowns suit you better than you had ever even dreamed – I didn’t want to take mine off! We also got to design our own imaginary dresses and it was just all the things I love under one roof: history, culture, fashion, museums, playing dress up and drawing. 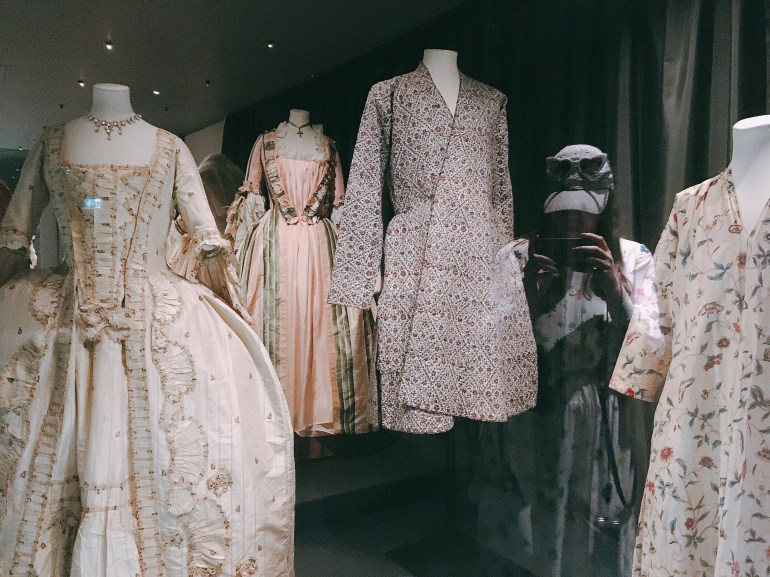 The real highlight was going out to the nearby village of Batheaston and climbing up the famous Solsbury Hill that Peter Gabriel once sang about. A whim of my best friend’s, I wasn’t overly stoked about the idea at first. However, she wanted to do it, so I went along with it. Note the word, “whim”. Calling it a, “plan,” would be far too generous. We decided to go for it towards the end of the first day and hadn’t really researched it properly. We also had been walking around and sweating in the heat all day but, still, we persevered. The idea of getting the bus there was batted around but I suggested getting a taxi as it was only a 15 minute drive and I had holiday brain and didn’t want to figure out buses in a strange city. Don’t do this. The bus is frequent, cheap and fast and drops you right into the village. We should have taken the bus. 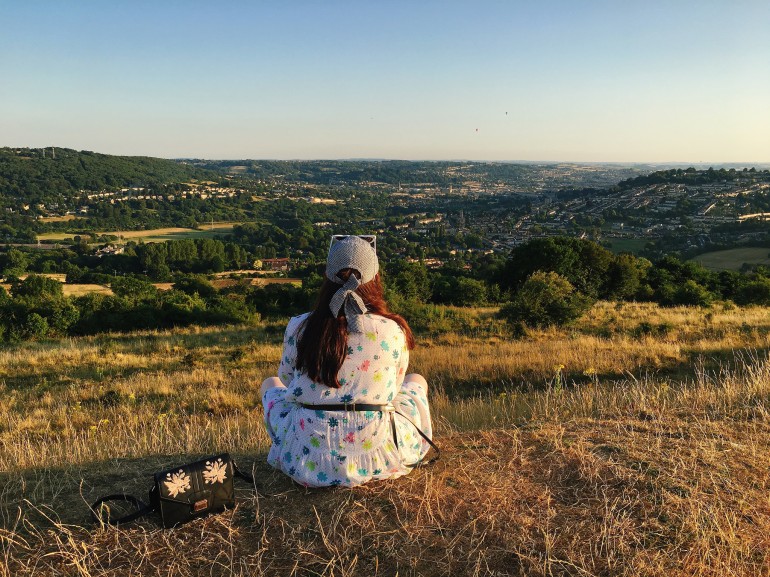 Our taxi driver was confused by our mission and, though he knew the song when we played it for him, he didn’t know how to reach the hill so I, somehow, ended up directing him. He dropped us into the village but, had we done more research, we might have copped that he could have driven us right up the steep roads, almost to the top of the hill itself. We didn’t know this so we hopped out at the George & Dragon pub and managed to walk fifteen minutes up another steep hill in the wrong direction before finding the right way. I feared we’d made a horrible mistake as my friend was already rather dehydrated and tired and it was still incredibly hot, I could hear her having a tough time on the walk and we’d read that another hour and a half of walking awaited us. However, when we reached the end of the road and entered the field at the base of the hill proper, we crested it in less than five minutes and found the most extraordinary sight; a panoramic view over Bath and the surrounding area, a pretty field of grasses, more butterflies bobbing around than I have ever seen in one place before, and four hot air balloons taking off over the horizon. It was picture-perfect and well worth the stress and effort!

The next morning, after the busy day before, we decided to go to the Thermae Bath Spa. It’s not cheap, by any means, at £40 for a two hour session (during weekends). However, it is a wonderful treat and a chance to actually experience the thermal waters that made the town so famous. We started out in the roof-top pool – which, sadly, I couldn’t photograph as phones and cameras are not allowed – and it was incredible; boasting sweeping views over the city. I found the 35-38 degree (Celsius) water fine, even in the hot weather, but some might need to be careful as I know my friend struggled with it a bit. Once we grew afraid of sunburn, we tried out the various saunas and steam rooms for a while and then spent time in the larger indoor pool downstairs. While we had just those two hours, we left the place feeling thoroughly refreshed and happy and it was an amazing experience, so I guess the price-tag is worth it.

Bath really blew me away. I wasn’t expecting to love it so much but I was utterly charmed by the beauty of its streets, the smoothly-run attractions, the rich history, the many cute eateries and just how freaking adorable the place is! It is a perfect weekend destination and, from Ireland, it’s easy enough to get there; just take a plane to Bristol Airport and a bus or train to Bath (and hope to God that your flight home doesn’t get delayed three hours when you’re out-of-your-mind-relaxed from a spa day and not able to cope…)

Looking for more travel content? Check out our guide to Kenmare and things you need to know before travelling to Seoul for the first time…